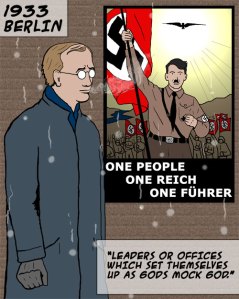 This is from a graphic novel of Bonhoeffer I found on bonhoefferblog.

Bonhoeffer wrote a book called Life Together laying down guidelines for communal living in the 20th century. He was a vehement opponent of the Third Reich. At a time when Nazi policy was to eliiminate the weakest (Jews, gays, gypsies, mentally ill et al) Bonhoeffer was arguing for small family-like units to protect the smallest and the weakest. He used the image of chain links as in this quote from Life Together:

In a Christian community, everything depends upon whether each individual is an indispensable link in a chain. Only when even the smallest link is securely interlocked is the chain unbreakable. A community which allows unemployed members to exist within it will perish because of them. It will be well, therefore, if every member receives a definite task to perform for the community, that he may know in hours of doubt that he, too, is not useless and unusable. Every Christian community must realize that not only do the weak need the strong, but also that the strong cannot exist without the weak. The elimination of the weak is the death of the fellowship.

While reflecting on this I have been reading The Boy in the Striped Pyjamas (film clip below). This is a very powerful – and very simple – story of two boys who strike up a friendship either side of the wire fence of Auschwitz. A different sort of story of Hitler’s Germany. Another story is told in the film Defiance – a film of four Jewish brothers from Poland who escape the Nazis to fight back to rescue fellow Jews – (on my list of films to see).