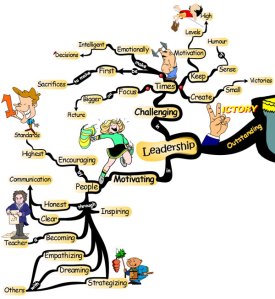 Following the example of the patriarchs (see this post) is it fair to say that leaders aren’t born with wonderful personal qualities – but by guile they emerge as leaders?They are from the same cesspit as the rest of us, so we should have realistic expectations of them. I’m going to stop looking for perfection in them. Instead I expect leaders to emerge whose commitment is to turn life round in favour of justice – and whose commitment is to resist the tide of despair and bitterness. Such leaders inspire change for the good of others. I won’t look for perfection (anyway, perfection isn’t a verb – perfection doesn’t necessarily do anything). Instead I will look for people who do more and better than they might have done – and help us to be and do better.

Here are some good clues about leadership – including this mindmap.

>Steve Bell draws attention to the “whited sepulchre” in his cartoon on MP’s expenses.
Matthew’s gospel has these words: “What sorrow awaits you teachers of religious law and you Pharisees. Hypocrites! For you are like whitewashed tombs–beautiful on the outside but filled on the inside with dead people’s bones and all sorts of impurity” (23:27). John’s gospel also has these words: “Let him who is without sin cast the first stone” (chapter 8)

I don’t know about you, but I’ve had enough from the lynch mob – and it is time to draw a line under the whole sorry affair. I don’t know why we should be so surprised when our leaders show themselves to have feet of clay. Out of some sort of idolatory we expect our leaders to be perfect – or is it that we think ourselves as perfect?

As luck would have it the Bible reading for this morning was Genesis (27&28)- exploring the world of Esau and Jacob (twins), Abraham, Rebecca and Isaac – with Laban thrown in for luck. Together Abraham, Isaac and Jacob are known as the “patriarchs”. Stories about all of them could have kept our tabloids going for years. Abraham passed his wife off as his sister (to Pharoah). Rebecca was a schemer. Jacob was a cheat. Esau was resentful. I could go on. Why did not the religious leaders hide the flaws of the patriarchs? I suggest that it was because they wanted to be realistic about human nature – saying “this is what we’re like – and it’s no good pretending otherwise”. It was to characters such as these (and such as ourselves) that God promises the earth – in spite of the scheming, deceit and betrayal. It is significant that the founding fathers of Judaism and Christianity could do nothing of themselves. The foundation of our faith is not that we all have to be good but that we have to depend on God to turn the tide of despair and bitterness.

On the same day as we scoff and mock our political leaders history has been turning in Northern Ireland. At last a peace settlement has been achieved for which our PM(flawed like the rest of our leaders) paid tribute to all those who had made the settlement possible. It is a magnificent achievement to have sworn enemies holding the reins of power together. Gordon Brown described it as “inspirational” and a lesson for the world that conflict resolution is possible. The peace has been won by courageous leadership. The architects of peace are flawed but courageous enough to know that history is flawed by conflict and transformed by compromise/forgiveness. There can be no forgiveness without flaws!