A sermon for St John’s Day for St Alban’s, Broadheath 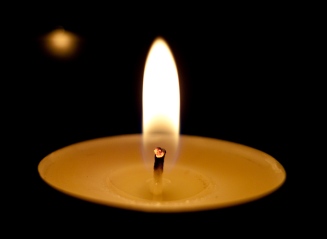 Is there anyone here named John …… or Jonathon, or Joan, or Jean, or Jeanette, or Janet, or Ian or Joanne or Johnson, or Jones ……?

We light a candle to you today, because it is your name day – it is St John’s Day.

Do you know what the name means?

It’s from the Hebrew, Yohanan, which means “Yahweh is gracious”.

What a lovely name to carry. (I often wonder how our names shape our outlook and who we are.)

There is no birth story in John’s gospel. There’s no Bethlehem, Nazareth, shepherds, wise men or baby Jesus. Simply and wonderfully John begins his gospel:

That is a birth story of a different kind.

And the Word became flesh and lived among us.

One of our most favourite paintings is the painting by Holman Hunt of the Light of the World – which pictures Jesus standing at the door of our dark lives, knocking. Holman Hunt painted the picture – John gave us the picture: a picture of the light which shines in the darkness – a picture of hope, warmth and tenderness.

As John talks about the Light of the world he talks about seeing. Time and again there is the invitation in his gospel “Come and see”. While the people in Matthew’s gospel are divided as sheep and goats, in John’s gospel the division is between those who see and those who don’t see.

Those who see don’t just see with their eyes. They see with their hearts. John uses three different words for seeing. There’s the seeing with the eyes, as in John 20:1 when Mary Magdalen went to the tomb and SAW that the stone had been moved from the tomb. That was something she noticed, that she saw with her eyes.

A little later in that same chapter (John 20:4) Peter looks into the tomb and sees the linen wrappings there. John uses a different word for seeing – it’s a seeing with the mind as when we say “the penny dropped”. It began to dawn on Peter. He began to understand what had happened.

Then finally, just a few verses on in that chapter, 20:8, the other disciple, the one Jesus loved, went in the tomb. “He saw and believed”.

So John describes three ways of seeing – with eyes, with the mind and with the heart. That’s why we can all see the same thing and come to different conclusions. That’s why when we have different commitments to the same conclusions. We see a lot of things but barely take notice, we understand other things and just a few things we know by heart.

I knew a man who did see but then became blind. And he was greatly troubled by John’s gospel with its language of light and sight. The world became dark to him – the darkness spread from eyes to mind, from mind to heart, but the darkness did not overcome him. There came a time when he started to see by heart. He called it WBS – “whole body seeing”. Imagine his joy when that darkness lifted.

Specsavers may help us the mistake of stripping in the kitchen (with all its sharp knives) instead of the sauna, or help us to make sure we are snogging the right person on the train platform, but however many pairs of glasses Specsavers give us they are not going to help us make sense or make love with the world.

We may have excellent eyesight. We may have three degrees, be clever clever with all the things that we see with our minds, but until we see from our heart we will never be able to read the love that is between the lines.

John tells the story of the man born blind who was helped to see by Jesus. The incident caused a great deal of trouble. Jesus told the man who had been blind “I came into the world for judgement so that those who do not see may see, and those who do see may become blind.” To which, some of the Pharisees said “surely we are not blind, are we?”

But there are things that we don’t see aren’t there? For example, we tend not to see what is happening in the Jungle at Calais. And on the other hand, there are those who are so moved with compassion that they do see the suffering of others, as celebrated by the Christmas Number 1 by the Greenwich and Lewisham NHS Choir.

The Pharisees question is the wrong question. “Surely we are not blind, are we?” They don’t see, do they? The question that we should be asking is “How can we see?” or “how can we see by heart?”

John gives us an answer.

The disciples and Jesus had many meals together. They didn’t use tables and chairs – those of you who have holidayed in Turkey will have seen how people still eat – sat on cushions on the floor around a slightly raised table. John’s gospel refers to “reclining” at the table. In his account of the Last Supper

John 13:23: Now there was leaning on Jesus’ bosom one of his disciples, whom Jesus loved. (KJV)

That’s where the disciple Jesus loved had his head, with his ear to Jesus’ heart – at the bosom of Jesus, so close he could hear the heart-beat, the whisper of Jesus in his ear: seeing by heart what Jesus also knew by heart because he too (1:18) is at the bosom of his father. NRSV translates that verse as “No one has ever seen God. It is God the only Son, who is close to the Father’s heart, who has made him known.

The disciple who lay like this is not named by John. Some have said that it is John himself. It’s more likely that he chose to leave the identity open – so that all beloved disciples could read themselves into this story. John means us.

Or we could go to another gospel for an answer. We can go to the birth stories of Jesus, to the point of view of the crib, recognising God’s outlook from the vulnerability of a baby, and realising that we see our lives differently in the light of the light of the world, that we see others, even strangers and enemies in a new light, and that helps us to read the love between the lines that the world draws us to divide us.