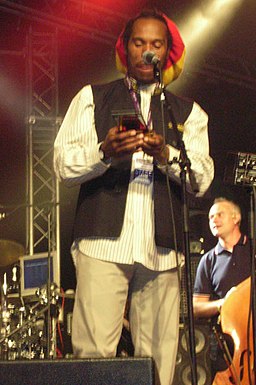 Benjamin Zephaniah describes himself as a “Rasta Folkie”. He’s a well known British poet who plays the part of Jeremiah Jesus in Peaky Blinders (I love Peaky Blinders!). He comes from Wandsworth, Birmingham, which he describes as the “Jamaican capital of Europe”.

I am posting a poem a day for Refugee Week. This poem is called The British and is about what makes us tasty. I am from Leicester which has a long tradition of welcoming refugees (as in this welcome the city gave to Basque refugees in 1937). But even there, I remember signs in pub windows in the late 50’s and early 60’s which said “no blacks, no gypsies, no Irish”. Little did they know, and little did they understand that they were from a long standing melting pot with some good, hearty refugee stock.

Take some Picts, Celts and Silures
And let them settle,
Then overrun them with Roman conquerors.
Remove the Romans after approximately 400 years
Add lots of Norman French to some
Angles, Saxons, Jutes and Vikings, then stir vigorously.

Mix some hot Chileans, cool Jamaicans, Dominicans,
Trinidadians and Bajans with some Ethiopians, Chinese,
Vietnamese and Sudanese.
Then take a blend of Somalians, Sri Lankans, Nigerians
And Pakistanis,
Combine with some Guyanese
And turn up the heat.
Sprinkle some fresh Indians, Malaysians, Bosnians,
Iraqis and Bangladeshis together with some
Afghans, Spanish, Turkish, Kurdish, Japanese
And Palestinians
Then add to the melting pot.
Leave the ingredients to simmer.
As they mix and blend allow their languages to flourish
Binding them together with English.
Allow time to be cool.
Add some unity, understanding, and respect for the future,
Serve with justice
And enjoy.

Note: All the ingredients are equally important. Treating one ingredient better than another will leave a bitter unpleasant taste.
Warning: An unequal spread of justice will damage the people and cause pain. Give justice and equality to all.

It was a good day because we had a good reception.

It was a day in which we went from one organisation to another and were well received. Starting with the Premier Inn with staging posts at solicitors, Waitrose, funeral directors (Adkinsons), the local church (Oadby), The Curry House and Tesco Express (above Conduit Street, Leicester) we got the sort of reception that we wanted and which helped to turn what could have been a difficult day into an occasion of thanksgiving.

The person who meets our enquiry is crucial to reception. This is the person who meets us at the door. I suggest that each organisation considers the strategic importance of the person “on the door” and the “welcome on the mat” and that there is an underlying question for them to bear in mind. That question is “what sort of reception am I giving?”

Many organisations are able to set aside a dedicated physical space for Reception. But the question of what sort of reception am I giving makes me realise that my own personal organisation (ie ME) needs to give some thought to the development of space in which others may find good reception.

I suggest five rules of engagement:

Have you got other suggestions borne from experience of getting good reception (or bad)?

I was intrigued by ideas of hospitality and celebration whilst watching Jamie Oliver on Channel 4 last night. I was wearing my metaphorical priest’s hat. Jamie gets everywhere on TV. The British public loves him for his energy and commitment. Last night’s programme focused on my home city, Leicester. Jamie’s comments began by highlighting the prospect of Leicester becoming the first UK city where the majority of the population is non-white. Jamie’s glass is definitely half-full and last night’s programme saw him at the asian veg stall on Leicester market and in the kitchen of Amita Mashru’s Gujerati restaurant eager to celebrate what immigrant communities have brought to us and our cooking and to celebrate the British achievement of entertaining different food cultures, and the spices of our foods picked up from different corners of the world.

The call to welcome the stranger is anchored in the Torah and was a part of themeasure of the Hebrew community’s faithfulness to God. When a traveler came totown, they waited by the well, and it was incumbent upon the townspeople tohouse and feed the visitor for the night.Of course, these travelers were rarelyfamily. … They were aliens, often foreigners, people who had different foods,different clothes, different languages, different gods. Opening one’s home wasrisky. Today we’d describe such a thing as out and out foolish. … Suchhospitality was central to the Hebrew identity. The risk did not define thepeople; their hospitality did, for they knew such hospitality was central tothe character of their God. The same was true in the early Christiancommunities. Paul reminded the Romans to offer hospitality to the alien, and inthe Letter to the Hebrews the people were reminded to show hospitality to allfor in so doing some entertained angels unaware. In Acts, the early deaconspracticed hospitality throughout the community, bringing welcome to those inneed. And in Matthew’s community, hospitality still measured the faithfulnessof the people. Welcoming prophets, righteous ones and disciples (those whomMatthew called “little ones”) was a disciplined practice of the young churches.

What seems to make Jamie such a good host and celebrant is his joie de vivre, the love of his subjects and his love of what people bring to the table. He seems convivial and congenial. Life tastes both bitter and sweet to Jamie’s palate, but his joy in that concoction is infectious. Being entertained and fed by Jamie is intriguing and is challenging my own hospitality and how I play the role of host.