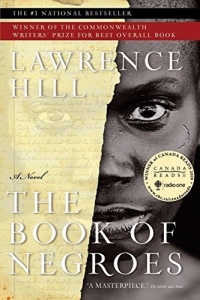 I have just been reading The Book of Negroes by Canadian author Lawrence Hill. It gets its controversial title from a historic document from the 18th century which is kept at the National Archives at Kew. It is a ledger of over 3,000 names of enslaved African, the “Black Loyalists” who escaped to Britain’s lines in the American Revolution. It was the first time in history that thousands of black people were formally recorded by a historical body, in this case, the British Navy.

The book describes the journeys of Aminata Diallo who was grabbed from her village in west Africa in 1750 by slave traders. She was just 11 when she had to walk “three moons”, shackled in irons in a coffle from her village of Bayo to the ship which would take her into slavery in the American colonies.

She makes the most of her very limited opportunities. She learns to read and write (in secret), and she longs to return to her homeland. Occasionally she is able to look at maps of Africa, but there were no places marked on them except for a few ports. Inland was shown with drawings of elephants – as if that was all there was.

I wonder if that is where we are sometimes. We can map thresholds and the ports. We can say so and so lives there. We can recognise faces but sometimes can’t get past face value. It is only when we care to listen, to let people speak, to allow them to show us around their lives that we begin to build up a better map of where they have come from, and where they might be journeying to. (The more diverse the maps, the better – geographical, historical, political, psychological dimensions all add to our understanding.) Then we begin to understand the hinterland. Then we can better understand each other.

This is what Aminata writes at the end of her story:

I would like to draw a map of the places where I have lived. I would put Bayo on the map, and trace in red my long path to the sea. Blue lines would show the ocean voyages. Cartouches would decorate the margins. There would be no elephants or want of towns, but rather paintings of guineas made from gold mines of Africa, a woman balancing fruit on her head, another with blue pouches for medicine, a child reading, and the green hills of Sierra Leone, land of my arrivals and embarkations.

PS. When I say that Lawrence Hill is a “Canadian author” I am guilty oversimplifying the map of his life – drawing elephants, if you like. He was born in Newmarket, Ontario – the son of a black father and a white mother who moved to Ontario from Washington DC. These are details to add to the map of Lawrence Hill’s life. Reading another of his books, Black Berry, Sweet Juice: On Being Black and White in Canada might add psychological and sociological dimensions to that map. I’d like to find out by reading more.