Spirituality “must now touch every area of human experience, the public and the social, the painful, negative, even pathological byways of the mind, the moral and relational world.”
Rowan Williams

“Spiritualities that are disengaged from the world, rather than committed to it and to its transformation, fail to reflect the irrevocable commitment of God to the world in Jesus Christ.” 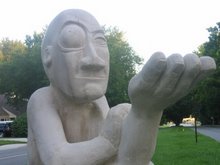 Miroslav Volf in Free of Charge (subtitled “Giving and Forgiving in a Culture Stripped of Grace” expands on the theme of God the Giver who continues to give in a world inclining towards “gracelessness”. He speaks of faith:

Faith is not something we give to God. In that case, faith would be a work, and a silly kind of work because it would be work we do even though it deosn’t benefit anyone. But exactly the opposite is true. To have faith in God is to be “without works” before God (Romans 4:5). Faith is the way we as receivers relate appropriately to God as the giver. It is empty hands held open for God to fill…. In contrast good works offered to God dishonour God; they tell a lie about God and our relation to the divine Giver, and they take away God’s due.

I remember David Lunn, on hearing of his appointment to be Bishop of Sheffield speaking of his surprise because he felt “he didn’t believe enough”. Who hasn’t thought that?
The faith that expresses itself with hands outstretched trustung God’s gifts is something of the heart. When I say something like “I’m not sure what I believe” part of that is to do with my head and perhaps is saying “there are loads of things I don’t understand”.
Being empty handed before God suddenly makes that not matter. There is nothing we can do to make God love us more, and there is nothing more we can say which will make him love us less. All we can give to God is delight or pain.
Rowan Williams likened the giving of God to the Niagara Falls. Love cascades to us – that’t the empty hands bit – but it’s only living water if we release the gifts to others. If we don’t the water stagnates and becomes poisonous.

Is it the ability to “grasp the intense suffering of the human condition without fear or flinching, and to be able to live with that knowledge and find within it hope and a great compassion”? Madeleine Bunting describes holiness in this way as she recalls the recent meeting between, what she describes (and I agree) two of the world’s holiest men.

Madeleine Bunting’s article in today’s Guardian is very much on the ball about Anglicanism, Lambeth and the Archbishop.

This is what the men share, and strikingly it is not in what they say that one senses it, but in their presence and how they relate to people: the warmth and humour, the lack of egotism to neither perform for listeners nor manipulate them, the humility and the capacity to pay attention. The holiness is not to be found in slick communication skills – both men are complex thinkers whose ideas are very hard to compress into soundbites – but you sense the holiness in the face-to-face encounter. A world that increasingly speaks to itself through media of mass communications increasingly cannot recognise this, the most inspiring of human experiences.

Williams may be one of the most holy men to lead the Church of England, but shame on us and our age for proving the old adage true: a prophet is never recognised in his own land.

Madeleine Bunting recognises that global communications are disrupting all religious traditions, traumatising identity and fuelling a literalist fundamentalism; the result is a gross simplifying of the complexity and paradox that is part of human experience.

The presenting issue is “gay clergy” and ++Rowan is told to get a grip. What is the point of that when people have adopte such extreme positions? He would only have to “get a grip” on the next issue and the next. The presenting issue is “gay clergy” (or to others “women bishops”) The real issue is how we deal with difference. That is the issue of our post-modern world. In Archbishop Rowan we perhaps have someone who is wise enough, holy enough and strong enough to lead us on that.

>Public theology is a funny expression suggesting that there is a choice between private and public theologies, or rather between bad theology (theology that remains private is not Christian theology) and good theology.

Public theology is what is happening when Archbishops etc make their reflections public and relevant. How difficult it is though – and that was illustrated at a meeting of clergy today. A neighbouring clergybod said how she felt she didn’t know enough to comment on various bits of church news when people ask her – in so saying, she was doing a bit of public theology by making her concerns public. She was jumped on by someone with the “right” answer. (Heaven preserve us from those who’ve got the last word!) I reckon theology to be a process to be undertaken publicly as the church through collaboration. Theologies develop through interaction with others and through prayer – never the finished article because there is always an OTHER to be heard from somewhere.

It is very difficult being Christian in public and doing theology in public. There are always those ready to twist what is said and done – whether it is my friend Jane, Rowan or Jesus – and the public aren’t always very interested in finding out what we really meant. Jesus did not try “that’s not what I meant”. He just suffered the consequences of public theology.

And this isn’t public theology – I don’t think – but it’s Spike Milligan.