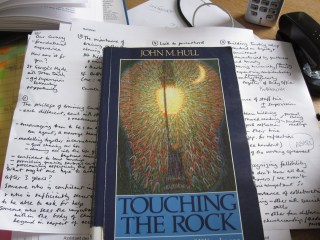 Interesting discussion on supervision at yesterday’s training session for those who are going to be “supervising ministers” for newly ordained clergy.

Peter Chantry offered insights from his experience as he looks forward to welcoming a new curate to his Nantwich parish. They safeguard space each week for a supervision session. One hour every Thursday morning. That is impressive. One of the impressive aspects of his presentation – besides his low-tech mind-map handout – was his emphasis on the quality of the relationship and the way that he is obviously facilitating a collaborative/community approach to formation. There is evidently a care-full building of trust for the relationship “centred on loyalty and commitment, characterised by gentleness and honesty, sharing humanity, respecting confidentiality, meeting & praying regularly.” Good stuff.

It begged the question from friend Julian of what supervision is for. Or, what does successful supervision look like?

I wonder. We spend so much time talking about supervision, insisting that it is a good thing – but what is it for? Is it about “seeing things for ourselves”, “seeing through things” (where there were blind spots), and “seeing things through” (sustainability)?

I have been reading John Hull‘s incredibly moving and honest account of the onset of his blindness, Touching the Rock. He refers to the “thousands of tiny accidental happenings” which led him along the path to blindness. According to Hull faith transforms such accidental happenings into the “signs of our destiny”, by “retrovidence” rather than “providence”.

He describes his stumbling on the altar at Iona Abbey during his stay there in 1986, through which he became a WBS a “whole-body-seer”. Here he sees things for himself, sees through his blindness, and discovers how he can see things through. His seeing is full of feeling and emotion as he touches the rock.

“After several nights, I discovered the main altar. I had been told about this, and I easily recognised it from the description. It was a single block of marble. Finding one corner, I ran my fingers along the edge, only to find that I could not reach the other. I worked my way along the front and was amazed at its size. The front was carved with hard, cold letters. They stood out baldly, but I could not be bothered reading. The top was as smooth as silk, but how far back did it go? I stretched my arms out over it but could not reach the back. This was incredible. It must have a back somewhere. Pushing myself upon to it, my feet hanging out over the front, I could reach the back. I did this again and again, measuring it with my body, till at last I began to have some idea of its proportions. It was bigger than me and much older. There were several places on the polished surface which were marked with a long, rather irregular indentations, not cracks, but imperfections of some kind. Could it have been dropped? These marks felt like the result of impact. The contrast between the rough depressions and the huge polished areas was extra ordinary. Here was the work of people, grinding this thing, smoothing it to an almost greasy, slightly dusty finish which went slippery when I licked it. Here were these abrasions, something more primitive, the naked heart of the rock.” (P 163).

PS Simon Marsh has a different slant on this and has an interesting post on teaching the world to listen – with a video of profoundly deaf musician Dame Evelyn Glennie.