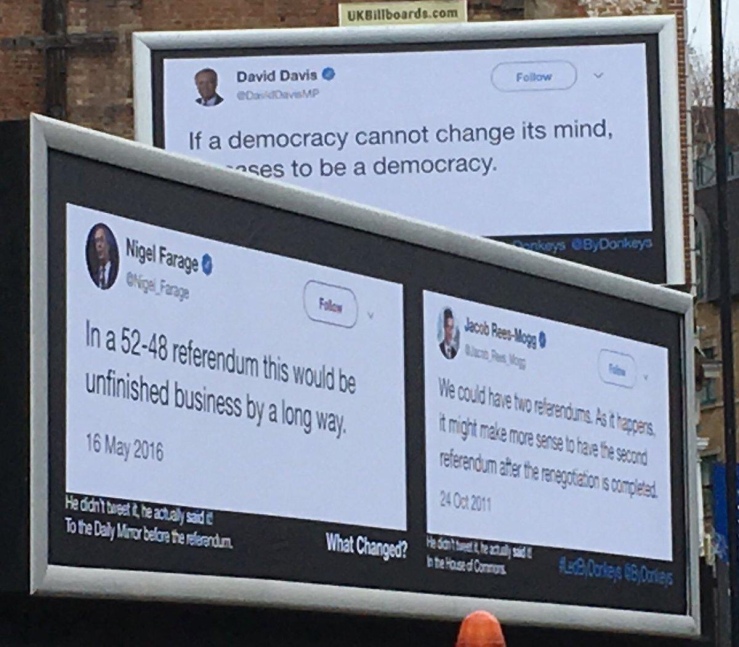 Brexit shambles and uncertainty continues as the government suffers another humiliating defeat. Parliament struggles to find a way through an impasse which bears the stamp “made in England” – not made in Britain.

What was dreamed up by some in England (and set alight by papers) has drawn other nations in. Not only Scotland and Northern Ireland and, of course, Wales, but the other 27 nations of the EU. We seem to have forgotten the trouble we are putting these other nations in. What time and money this all must have cost! How distracting from other challenges facing us!

Slowly options are being narrowed down. There are very few people who want us to leave without a deal, and hopefully Parliament will take that option off the table today. And then there become two. There’s either the Withdrawal Agreement, which has been so decisively voted down in Parliament. The EU are insistent that there can be no other. But it does seem that would risk so much and there is no way of knowing what future trade deals there would be, or what manufacturing base would vote “remain” and remain, or what the effect of unravelling institutions for peace and research development. Or there is the deal which we already have as members of the EU.

Sadly Parliament has been unable to find a way through the impasse. It isn’t helped by the fact that truth is “spun” and so often not told. Parliament should be a safe container for our differences. Ideally those we elect represent our differences in that space and work to resolve them so that we can remain committed to one another. I fear what will happen if this safe space no longer works, what will happen if there is a further vote, whether that be a General Election or a second referendum. But I am beginning to see that that is what is going to happen. The people are going to be the ones with the casting vote. I dread the strife on our streets and in families. But it might have to come to this. It seems we have a choice between two:

There is the third option of the deal which we can never have – that dreamt up by those in Never Never Land. It seems to boil down to a choice of two. The first is a vote to leave. The second is a vote to remain.

Oh no, not that again.

And where will our political parties lead us? The Conservatives are surely cornered as the Brexit party. But what about Labour? Now all options are looking exhausted, (and Parliament has been right to exhaust them), they surely now have to campaign at last on the deal we already have, which is in those two political and economic unions in which there is always room for improvement and reform – that is, the UK and the EU.

Credit to Teresa May. She voted remain but has worked tirelessly to deliver the vote of the referendum. And credit all those involved in both sides of the negotiations. They have tried to find a way – but perhaps there never was a way that would leave our nation any better off.

PS thanks to the billboard campaign @bydonkeys, as, for example, shown in the photo above.

unbutton
untie
the breeze
cool down

As we gear up to the General Election (which was never going to be called) we are entering manifesto season. I love the word manifesto, full of show and promise. I start the day with words from the Old Testament: the reading appointed for today has this:

“So now, O Israel, what does the Lord your God require of you? … The Lord set his heart in love on your ancestors alone and chose you, their descendants after them, out of all the peoples …

Circumcise, then, the foreskin of your heart, and do not be stubborn any longer. For the Lord your God is God of gods and Lord of lords, the great God, mighty and awesome, who is not partial and does not take a bribe, who executes justice for the orphan and that widow, and who loves the strangers, providing them with food and clothing. You shall also love the stranger, for you were strangers in the land of Egypt.”

This is God’s manifesto – his show of promise which becomes the praise of his people. It contrasts with the meanness of some of the political manifestos which list what they can get away with, either for themselves or for the people, depending on your political point of view. My colleague, Christopher Burkett is helpful in his tweeted #cLectio reflection on this today:

We are all fearful of strangers. We worry about who will live next to us. Fear has always had the upper hand in our dealings with strangers. It is important for us to hear the voice from heaven commanding us to love strangers (with the unspoken implication, “do not let your hearts be anxious because of them”. Loving strangers, overcomes division, builds friendships and makes a fabric for society – and responds to the needful knocking on the door. There is great wisdom in the reminder that we were all once strangers (and some stranger still!) to one another who now count ourselves friends.

I was grateful to be reminded today of the Russian poet Yevgeny Yevtushenko. Yevtushenko died on April 1st 2017. Jeanette and I saw him perform his poetry in Sheffield’s Crucible Theatre in the 70’s. I well remember the way that he shuffled his feet as he dramatised a journey for one of his poems. Father Richard in one of his tweets, points us to Yevtushenko’s poem (Guardian Poem of the Week) in which he makes the point that “there are no boring people in this world”. In this poem he underlines our differences, that we are distinct from one another as planets are distinct from one another. In my words, “we are worlds apart”. That’s it. We are strangers to one another with very little common ground except that we are all stranger. This poem seems to embrace our stranger status, that though we are worlds apart, we can mean the world to one another. Here’s the poem (beautifully translated by Boris Dralyuk):

There are no boring people in this world.
Each fate is like the history of a planet.
And no two planets are alike at all.
Each is distinct – you simply can’t compare it.

If someone lived without attracting notice
and made a friend of their obscurity –
then their uniqueness was precisely this.
Their very plainness made them interesting.

Each person has a world that’s all their own.
Each of these worlds must have its finest moment
and each must have its hour of bitter torment –
and yet, to us, both hours remain unknown.

When people die, they do not die alone.
They die along with their first kiss, first combat.
They take away their first day in the snow …
All gone, all gone – there’s just no way to stop it.

There may be much that’s fated to remain,
but something – something leaves us all the same.
The rules are cruel, the game nightmarish –
it isn’t people but whole worlds that perish. 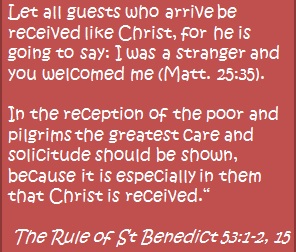 There are worlds of difference, but whole worlds to explore. But we’re not called to love strangers for our own self interest but for theirs. I hope that becomes manifest and manifesto.

You can see Yevtushenko performing his poetry here

Today marks the anniversary of Archbishop Oscar Romero’s martyrdom. He was shot dead on March 24th 1980 when celebrating Mass in the cancer hospital where he lived. This is from one of his sermons:

Those who have listened to me here in church on Sundays
with sincerity,
without prejudices,
without hatred,
without ill will,
without intending to defend indefensible interests,
those who have listened to me here cannot say
I am giving political or subversive sermons.
All that is simply slander.
You are listening to  me at this moment,
and I am saying what I have always said.
What I want to say here in the cathedral pulpit
is what the church is,
and in the name of the church
I want to support what is good,
applaud it,
encourage it,
console the victims of atrocities, of injustices,
and also with courage
disclose the atrocities,
the tortures,
the disappearance of prisoners,
the social injustice.
This is not engaging in politics;
this is building up the church
and carrying out the church’s duty
as imposed by the church’s identity
My conscience is undisturbed,
and I call on all of you:
Let us build up the true church!

Sermon preached on September 10th 1978, from Oscar Romero: the Violence of Love

Russell Brand is always worth listening to. He is passionate and outraged. He is intelligent, and, he admits to being “fucked up and naive”. He gave voice to his outrage in an interview with Jeremy Paxman on Newsnight. Simon Kelner described the scene in the Independant. “On one side was a rather effete figure with an unruly beard who found it hard to take anything seriously, and on the other side was Russell Brand.”

Since then Russell Brand has been reflecting on developments since that interview. They are published in today’s Guardian. He is passionate about change and connects with the new movements such as Occupy. He writes of his commitment:

Well I am naïve and I have fucked up but I tell you something else. I believe in change. I don’t mind getting my hands dirty because my hands are dirty already. I don’t mind giving my life to this because I’m only alive because of the compassion and love of others. Men and women strong enough to defy this system and live according to higher laws.

He has seen the Apocalypse:

The less privileged among us are already living in the apocalypse, the thousands of street sleepers in our country, the refugees and the exploited underclass across our planet daily confront what we would regard as the end of the world. No money, no home, no friends, no support, no hand of friendship reaching out, just acculturated and inculcated condemnation.

and he has glimpsed the revolution at the Watford Gap:

One night late at the Watford Gap I got chatting to a couple of squaddies, one Para, one Marine, we talked a bit about family and politics, I invited them to a show. Then we were joined by three Muslim women, all hijabbed up. For a few perfect minutes in the strip lit inertia of this place, that was nowhere in particular but uniquely Britain, I felt how plausible and beautiful The Revolution could be. We just chatted.

Politics is not just a tiresome consequence of human shortcomings, it is an ongoing conversation about how to bring out and empower the ocean of different gifts and talents in a community. It is not about the limited money in people’s pockets, it is about the limitless potential in their hearts and minds and souls and bodies. It is about how to engage all the energy that is about, and how to discern and embody that which constitutes the goodl life. It may not always be happy, beautiful, or rich, but if a community can express such a notion of politics, it can experience a goodness that other communities, with their impoverished politics, can only envy.
Sam Wells: God’s Companions (2006) p169