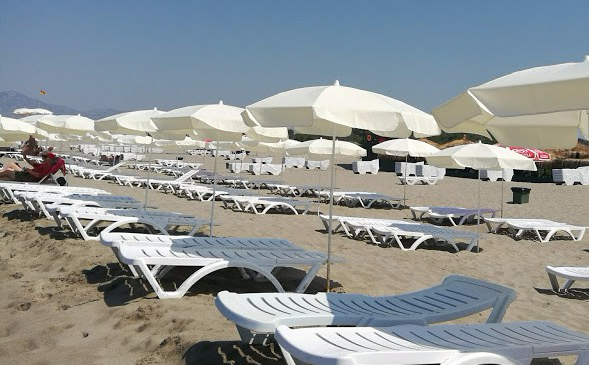 On this beach sound and sand we lay ourselves to rest:
an annual punctuation, a colon and breathing space,
kindling and basking delighted by overlapping waves
of welcome: a silver thread in tiredness’ tapestry.

Tourists and turtles take their turns digging to cool sand
for new generation; young engineers make their marks
and build playful fortifications without calculation,
fear or hope of castles not withstanding nature’s storms.

Backed by wholesome sun I chase my shadow along the shore.
The load lightens. My trace disappears. Crabs sidle home.
A stranger nods a Merhaba in my direction looking out
another place and pace: life less dash or need for colon.

A far cry comes from the harbour, long silted and stranded
in history and imagination. “Phoenicia bound?”,
the ship’s master’s call to those piering their next purpose
and horizon, and those otherwise beached and bedraggled.

Luke, a passenger, packs a gospel for this new ark
with his two by twos, his hims and hers, his young and old,
his Jew and Greek, and Paul, his complementary pair embark,
Turks off Patara beach, where the sun shines after storms.

And so, with the tearful good-byes behind us, we were on our way. We made a straight run to Cos, the next day reached Rhodes, and then Patara. There we found a ship going direct to Phoenicia, got on board, and set sail. Cyprus came into view on our left, but was soon out of sight as we kept on course for Syria, and eventually docked in the port of Tyre. While the cargo was being unloaded, we looked up the local disciples and stayed with them seven days. (Acts 21:1ff)

Notes for a sermon preached at Holy Trinity, Gee Cross.

Luke ends his Part One and begins his Part Two with a celebration of Jesus’ Ascension.

And the story of the Ascension is one that causes us all sorts of difficulties. It’s a story that stretches the dimensions of our lives, where earth and heaven connect – a tall story that is difficult to fathom.

40 days and nights have passed since Easter Day (40 days and nights!). Those 40 days were packed with Jesus’s appearances and his talk of the kingdom of God. The 40 days  end with this – a blessing, a promise and a withdrawal as Jesus was carried into heaven, carried out of the sight of the disciples on a cloud.

It seems like only yesterday that we were landing at Heathrow after visiting our son and his girlfriend in the Philippines. It is actually 40 days and nights – we landed on Easter Day, having been on a plane for 17 hours. The flight path reads like a where’s where of the world’s trouble spots.

How weird was it? Flying 38000 feet in the airspace above those trouble spots, with all their tensions, sufferings, betrayals, poverty and uncertainty, as if they weren’t there. We were flying over deep divides and no go areas as if they didn’t exist. We were like birds flying over reality and missing all that counts in human life. It was as if we were travelling in a totally different dimension.

(Another example would be our city’s flyovers)

For the last 40 days and nights it has been back to earth with a bang!

Which, I suspect is where we belong. We are, after all, Adam – humans made from the earth, to walk the earth, with our feet of clay. And for that, we believe that God loves us – and we may believe that is where God wants us to be – down to earth, earthy and earthed.  That seems to be the message that Luke is leaving us “God lovers” as he describes Jesus’s goodbye to his disciples, as he leaves them us to be “witnesses … to the ends of the earth”.

Grounded as birds without wings

I don’t know whether any of you have read Birds without Wings by Louis de Bernieres. I’ll try to describe the story without giving anything away for any of you who want to read it.

The story is set in innocence at the turn of the 20th century in a town called Eskibahce in south-western modern-day Turkey, then a part of the waning Ottoman Empire. The village potter, Iskander, a Muslim, makes clay bird whistles for his son, Abdul, and his Christian friend, Nico. Their whistles make different bird song. One is a blackbird, and the other is a robin. They take on the nicknames of their birdsong – Blackbird and Robin.

They are birds who fly over the hills overlooking their town. They play at flying, but, of course they can only fly in their imagination.

Reality soon becomes quite different, as the population of the town gets caught in events. They find themselves caught in the tensions between Greek nationalism and Turkish nationalism which destroyed the fabric of the town. The boys are of course, birds without wings, and they are caught up in the violence of the conflict. There is no way that they can fly over their divisions. They are earthy and they are earthed – and they suffer the consequences of down to earth historical realities. Such realities can only be overcome by living through them.

We all have flights of fancy, don’t we? But at the end of the day there is no escaping the day to day challenges of our lives. We cannot rise above them, but have to engage with them. We can’t ignore them, because that would be irresponsible and careless.  We have to live with our circumstances, and through the events of our lives.

Left behind for good

The picture that Luke paints for us is a farewell scene, which might remind of us other partings, and snapshots of farewell greetings with the waving of hands, the dabbing of tears, the heartache and the parting words.

Jesus is saying goodbye to his friends, but this goodbye scene is so different. It is not tinged in sadness, but explodes with joy, because Jesus’ parting words are full of promise. The promise is that the disciples, the God lovers, would receive power when the Holy Spirit comes upon them. That promise must have helped them to look forward with hope instead of looking backwards with sadness. The gift of the Holy Spirit transforms all our partings and farewells since that good bye described by Luke and celebrated by us today on this Ascension Day. The gift of the Holy Spirit is a blessing for all those who mourn. It is the help we need to live through what seems to be the dead ends of our lives. It is the comfort to ….. It is the strength to overcome.

The disciples were indeed left behind, but left with joy “continually in the temple blessing God”. They were left behind for good.

The good they were left behind for was surely to live through their lives as witnesses, in a way that God’s blessing shone through. Their lives weren’t easy. They faced hardships, imprisonment, persecution and death. They were hard pressed on every side, but they lived through those times.

The good they were left behind for was to convey the spirit of Jesus, to bring good news to the poor, to proclaim release to prisoners, to help the blind to see and to let the oppressed go free. (Luke 4:18f)

The good they were left behind for was to live through all of this, to keep their feet to the ground, to take the long walk through difficulties to freedom, down to earth, with feet of clay.

Like those God lovers, we have the same blessing – treasure in clay, earthenware pots. Is the challenge that Luke addressing to his dear readers just this: to be down to earth witnesses for all the earth by living through the tensions and challenges of our lives.

But this isn’t saddening. There is no reason to lose heart because of it.

Therefore, we go. We go in peace to love and serve the Lord, realising that it is now up to us.

Adapting a prayer of St Teresa of Avila:

We are left behind for good, with his blessing and spirit.

And so we set sail from Patara. Well we flew home from our holidays actually.

We arrived in Patara fairly wrecked, but left refreshed and restored, thanks to the place, its people, many friends and a great climate. We thrived on the wonderful welcome and service we had (particular thanks to Nadi and Mehmet at Golden Lighthouse). Nothing is too much trouble for the lovely people of this quiet village. I wonder how deep rooted traditions of hospitality and generosity need to be to be effective. They certainly seem to be part of Patara culture, which traces its history back beyond the days when it was the capital city of the Lycian League. It is a place that does us good at so many levels.

Acts 21:1 refers to Paul’s journey through Patara. Paul and Luke came to Patara via Kos and Rhodes. They changed ship at Patara to sail to Syria. It was good to be following in Paul’s footsteps, coming into Patara one way, and leaving in an altogether better shape for the onward journey.